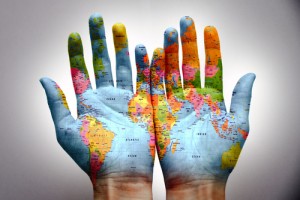 My commute to work each morning via public transport takes about an hour. Around 85% of my fellow commuters are glued to some kind of mobile device. It is incredible that people remain engrossed in their little gadgets for that entire time.

I often wonder what people are looking at:  Facebook, Twitter or the daily news? A good book? Maybe it’s the latest episode of Game of Thrones?

I have to admit that at times, I am also one of those people – if I am lucky enough to get a seat on the tram, I use the time to reply to the absurdly long emails my mum insists on sending me. (Does anyone else’s mum do that?? That’s a whole other article…)

As an avid people watcher I am intrigued by human behaviour and just how little we interact with people we don’t know. Gone are the days of sharing a giggle as everyone stumbles into each other when the busy tram takes off too abruptly. Instead, everyone is grumpy and seems to be irritated by the fact that their attention has been dragged from whatever it is that’s going on in their hand.

Where is the human connection? The whole point of all the toys we obsessively carry around with us is to ‘be connected’ but it seems we are forgetting the good old ways of staying in touch and as a result, we are actually losing touch with whom and what truly matters.

It is quite a bemusing concept that instead of being enthralled in the world around us, our own space and current time, we are fixated on the wider world – which ironically is contained on a screen no larger than a packet of cigarettes. Get your mind around that for a second.

I’m not suggesting for a moment that we shouldn’t be interested in what’s going on around the globe; it would just be nice sometimes if people were ‘present’.

So while we have so much information quite literally at our fingertips, are we focussing too much on superficial connections and what we think we might miss out on? Occasionally, take the time to remind yourself what is truly important to you or even better, scroll through your contacts on your phone or on Facebook and ask yourself this question: How many of these people would I invite to my wedding or even birthday party? The result will surprise you…

In today’s demanding and impatient society, we want[...]

Call centres face the challenge of living up to ris[...]

Just as every person has unique fingerprints; our minds[...]

Whether a personal or a business phone call, it is frus[...]

The Customer Is King

It is often said that the customer is always right…. Bu[...]